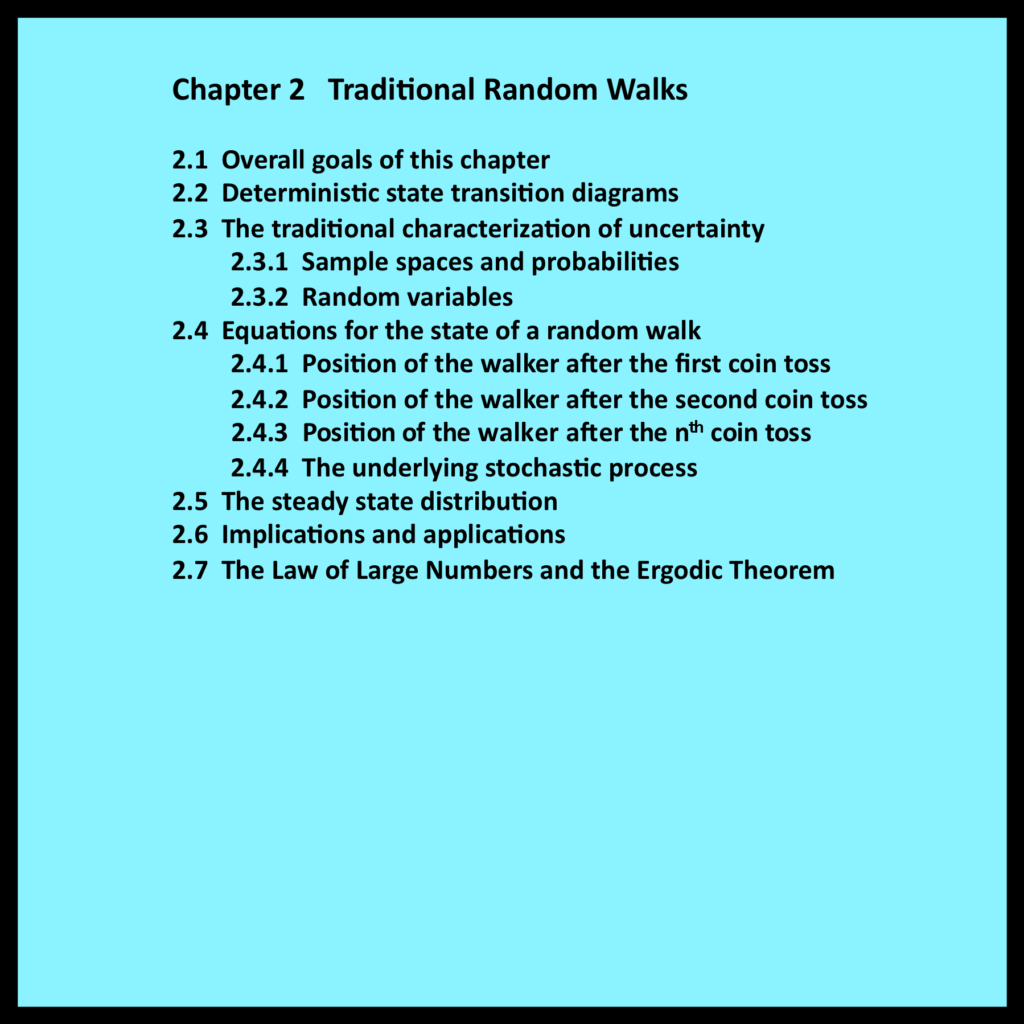 .1 Overall goals of this chapter

Chapter 1 introduced the concept of a simple random walk and  discussed several implications of equations (1-1) through (1-4).   However, these equations were not derived in a rigorously formal mathematical sense.  This chapter presents a derivation within the context of traditional stochastic analysis.  A number of basic concepts from the theory of probability and stochastic processes are reviewed in greater detail than is customary.  Readers already familiar with these aspects of stochastic modeling may wish to skip this chapter entirely and proceed to Chapter 3.

To begin the analysis, note that the transitions that take place during the random walk discussed in Chapter 1 can be represented by the state transition diagram shown in Figure 2-1. The circles in this figure represent the four stations, and the arrows represent the possible station-to-station transitions that can take place during a single step. Even though the walk is classified as random, the diagram in Figure 2-1 is clearly deterministic: if the walker is currently at station 1, and if the next turn is to the right, the walker will always move to station 2.

All the other transitions shown in Figure 2-1 are equally deterministic. Most “random” systems that are analyzed using stochastic models have a deterministic core that can be specified using a state transition diagram of the type illustrated in Figure 2-1.

2.3 The traditional characterization of uncertainty

The next issue to consider is the nature of the mechanism that causes the walker to move from station to station as the walk proceeds.   In order for the walk to be random, the sequence of left and right turns that directs the walker’s movements from station to station must be inherently uncertain.   One way to represent this type of uncertainty is to assume that the walker tosses a coin before leaving each station. If the coin comes up heads, the next turn is to the right; if it comes up tails, the next turn is to the left.

The abstract notion of sets and their members provides the standard mathematical foundation for dealing with uncertainty. Essentially, the members of a set are used to represent the possible outcomes of a process that is inherently uncertain. Such sets of possible outcomes are referred to as sample spaces.

In the case of a random walk, the set {heads, tails} is used to represent the possible outcomes of each coin toss.   There is, of course, a direct connection between the observable outcomes of an actual coin toss and the members of this sample space. However, the set {heads, tails} can also be regarded as an abstract entity whose existence is entirely independent of the physical world.   As such, its only properties are those defined within the formal domain of set theory: union, intersection, and so on.

For the random walk being discussed here, the outcome of each successive coin toss is represented by a separate random variable. For each of these random variables, the sample space is the set {heads, tails}, the probability associated with heads is equal to r, and the probability associated with tails is equal to 1-r. This sequence of identically distributed random variables, together with the relationships represented in Figure 2-1, provides the basis for a traditional stochastic model of a random walk.