A New Starting Point for the Analysis of Uncertainty 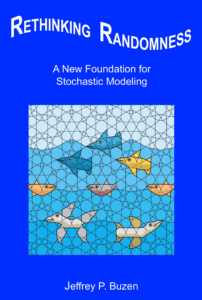 Stochastic models are used in many branches of science and engineering to analyze behavior that appears to be driven by random forces.  The mathematics behind these models can be forbiddingly complex.  Rethinking Randomness presents a surprisingly simple alternative for characterizing and analyzing such behavior – using little more than high school algebra and intuitive “back of the envelope” reasoning,

The alternative approach was motivated by a problem the author first encountered half a century ago:

Why do some probabilistic models work well in practice

even though the systems being modeled fail to satisfy the assumptions that these models require?

The solution to this puzzle starts with a new method for characterizing randomness – based on patterns and relationships that become visible when behavior is observed over intervals of time.   In contrast,  conventional stochastic analyses  begin with the assumption that random behavior is generated by sampling from underlying probability distributions (as in Monte Carlo simulations).   In Rethinking Randomness, standard assumptions about the way randomness is generated are replaced by alternative assumptions about what randomness looks like.

Despite the difference in starting points, the mathematical solutions derived in each case are remarkably similar. This opens the door to an entirely new understanding of when traditional stochastic models will – or will not – work well in real world applications where probabilities are routinely interpreted as proportions (e.g., the proportion of time that a system is in a particular state).

This website provides an extensive set of excerpts from the text of Rethinking Randomness, along with supporting material that was developed following the publication of this book.
.
.
…………………..
*Peter J. Denning is Editor-in-Chief of Ubiquity and a past President of ACM (Association for Computing Machinery)